By Julie Bindel, Original Signer of the #StopSurrogacyNow Statement, Journalist, Author, Human Rights Campaigner Against the Sexual Abuse of Women

Gujarat, a state in western India, once was known as the world’s dairy capital. But today it is the place to go to rent a womb.

Gujarat is the site of almost half of India’s surrogacy market and is known by its critics, of which I am one, as a giant “baby factory.” I traveled to Gujarat last year to investigate the surrogacy market, arriving only days after the Indian government ordered fertility clinics to stop surrogate-embryo transfers for those without Indian passports.

Posing as an infertile woman desperate for a baby, I visited clinics, claiming to have a husband with an Indian passport. The five clinics I visited offered surrogacy, and a representative in each clinic told me business would suffer as a result of the government directive. No one mentioned my age (I am 54) or asked any questions about my husband or our family life. It would appear that in the world of designer babies, it is money that talks.

The clinics I visited ranged from state-of-the-art buildings in middle-class residential areas to shabby, filthy places with no air conditioning and only very basic facilities. In each of the clinics, I paid a consultation fee of around 20 pounds and filled out a form about my history of infertility. I was informed that to access surrogacy services, I would need to produce my husband’s passport and our marriage certificate.

The first surrogate baby was delivered in India in 1994. Before the recent government directive was issued, surrogacy had been legal in India since 2002. Since that year, commercial surrogacy in the country has expanded massively and is now a gigantic industry.

By 2012, at least 3,000 clinics in India offered surrogacy services. Annually, surrogacy is a $2.3 billion industry across India. Before the government directive, roughly 10,000 foreign couples visited the country for reproductive services each year. In the United States, the surrogacy market totals about $6.5 billion, but surrogacy in the U.S. is five times more expensive than in India. 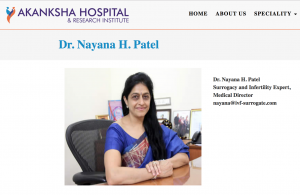 Dr. Nayana Patel is the face of the Indian surrogacy movement. She is the founder of the Akanksha Infertility Clinic in Anand, Gujarat, where more than 1,000 surrogate babies have been born. Last year, Patel opened the world’s first multimillion-dollar “baby factory” (the Akanksha clinic) and is lauded—by media sources, commissioning parents and pro-surrogacy organizations—as the woman who brings joy to countless childless couples. There are currently 75 surrogate mothers on the books of the Akanksha clinic, with around 50 pregnant at a time.

Once the embryo-plantation process begins, Patel’s surrogates are kept in a gated hostel close to the Akanksha clinic, where they eat, sleep and are monitored on a daily basis. The women are detained there, which is a serious infringement of their human rights, according to Sheela Saravanan of the Department of Medical Ethics and History of Medicine at the University of Goettingen in Germany.

“They are overfed, restricted in movements, not allowed to go up and down the stairs and not given codes for the elevators,” Saravanan said. “They aren’t supposed to do normal household work, and they are just supposed to lie around watching TV for those 10 months, and they are not allowed to meet their family or children. It doesn’t happen anywhere else in the world. It is poverty that is motivating them to do it, and it is inhuman.” 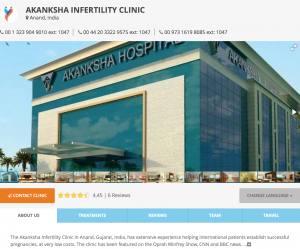 The women are told when and what to eat and drink and are not allowed to have sex, ride bicycles or take any exercise without permission. The women are prevented from using painkillers but are required to take products to help achieve pregnancy. These include Lupron, estrogen and progesterone, all of which can have damaging side effects. The women usually are impregnated with several embryos to increase the chances of pregnancy, and they can be forced to undergo selective abortion of one or more fetuses if multiple pregnancies occur.

Prior to traveling to Gujarat, I contacted Dr. Patel by email, respectfully requesting an interview with her for an article on surrogacy. Patel replied: “Dear Julie. Very sorry. We would not like it. So please do not come. Due to Festival [Diwali] we are closed. Also, we do not want to do any article.” I assumed Patel had read other articles of mine in which I criticized her surrogacy practices. Until recently, Patel had enjoyed almost universally positive coverage, including a 2007 television interview by Oprah Winfrey.

Surrogates in India usually are paid between $6,000 and $8,000, but they may not be able to keep the whole amount. Brokers—those who travel to villages and destitute urban areas to find potential surrogates—often take a substantial cut for themselves. IVF clinics are popping up in smaller cities and towns, focusing on poor, desperate women.

The Indian Society for Assisted Reproduction (ISAR) has a membership of 600 and protects the business interests of its members, but the streamline on the ISAR website could lead people to believe it is an altruistic service. It reads: “Making Assisted Reproduction Easily Available to Needy Infertile Couples.”

In her report on the government directive, journalist Vidhi Doshi—who supports Patel’s work—described how she visited the hostel to ask the surrogates how they viewed the restrictions on foreign surrogacy. “I’ve heard surrogacy is going to stop,” one woman told Doshi. “But we are all praying that this place stays open. All of us here support Dr. Nayana.”

I asked Doshi whether she was critical of the surrogacy industry. “India’s biggest problem isn’t surrogacy,” Doshi said. “It’s the vast inequality of wealth between the richest and poorest people of the country. The women I met at Dr. Patel’s clinic in Anand were not forced or coerced to come there; they came because they saw it as the only way to feed and educate their own children.”

Doshi said that if commercial surrogacy were forbidden, there soon would be an unregulated black market in place of the legal version. She feared conditions would be unhygienic, doctors would be substandard and the surrogate women would be paid less.

But the evidence contradicts Doshi’s arguments. Where there are lucrative markets, illegal, unregulated versions often appear. Despite commercial surrogacy being legal in India, organized criminal networks can still operate.

Saravanan of the University of Goettingen was originally from India, and she is passionately opposed to the surrogacy industry. I met her at a feminist conference in Paris earlier this year.

“This market is built on global injustice and global inequalities,” Saravanan said, describing her field research on women serving as surrogates in India.

“In one case the parents arrived 20 days after the birth and this woman [the surrogate] was looking after this child. She was breastfeeding the child, she had named the child after her daughter, so you can imagine the attachment she had to that baby,” Saravanan said. “After 20 days, these parents came from abroad, took the baby and walked out. They didn’t even want to meet her; even the money was handed over through some[one] else.”

During my clinic visits doctors told me that the surrogates often can earn extra money by breastfeeding the babies if the commissioning parents have not arrived in time for the birth. I can only imagine the additional heartache this would cause a woman who has carried a child for nine months and then bonds intimately with the child before being required to give it up.

As far as Saravanan is concerned, detaining the surrogates in a gated hostel is a serious infringement of the women’s human rights. “They are overfed, restricted in movements, not allowed to go up and down the stairs and not given codes for the elevators,” says Saravanan. “They aren’t supposed to do normal household work, and they are just supposed to lie around watching TV for those 10 months, and they are not allowed to meet their family or children. It doesn’t happen anywhere else in the world. It is poverty that is motivating them to do it, and it is inhuman.”

Surrogacy is marketed as altruistic rather than commercial, and the poster-girl image of the happy and healthy white American woman lending her womb to help childless couples is pervasive and persuasive. Gay men who use surrogacy to have their own children present it as a human rights issue, but having children is not a right, and I am far more concerned with the human rights of the women exploited through surrogacy.

In the U.S., 20 percent of the surrogate babies born each year are carried by military wives. I was recently contacted by such a woman in Pennsylvania who told me that she had been offered “a lot of money” to carry a child for a couple from a nearby state where commercial surrogacy is illegal. “But I only ever saw half of the money,” Sandra [not her real name] told me, “because he was born with a minor defect. I was blamed for not delivering the perfect baby, despite the fact I had cared for myself and for him all the way through the pregnancy. It took a year of my life, and left me depressed and with my own health problems,” said Sandra, clearly distressed. “I would warn any woman about doing [surrogacy], because it is far harder than the agencies make out.”

Sandra told me about a woman she met online who had been a surrogate several years earlier. “She told me her life had been ruined by the experience,” Sandra said. “And that she dreamed of her baby all the time. What broke my heart was that she did not even know if she had given birth to a girl or boy. They took the baby away before she was allowed to even catch a glimpse of her own child.”

The surrogacy industry sits at the interface between patriarchy and über-capitalism, in which it is morally and legally acceptable to sell or rent women’s body parts. A number of countries in Europe and elsewhere now are outlawing surrogacy as a commercial practice, and the feminist campaign to end womb trafficking is growing in strength. But surrogacy is built on class and race differences and is thriving in places like India precisely because of the massive division between the West and developing countries. We need to eliminate, not regulate, surrogacy.

This article originally appeared on truthdig.com.